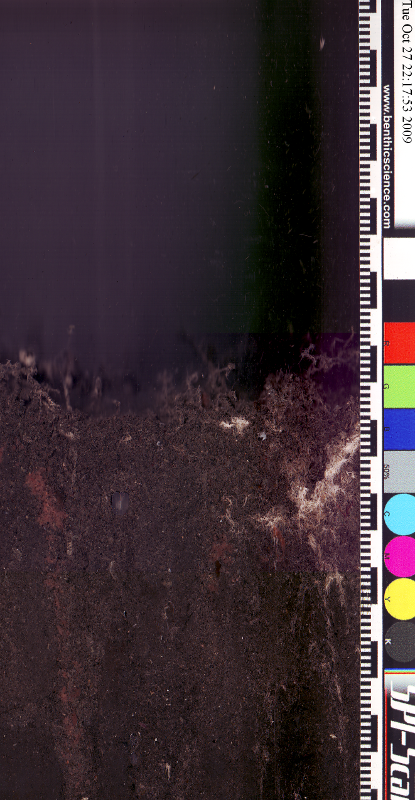 Last year at the joint D-Space/DunLUG meeting I made  a brief presentation on one of my research projects – the SPI-Scan system.  Several of my first prototypes are currently being used by universities, government agencies, and private consultants domestically and internationally to monitor the ecological health and human impacts on  shallow coast environments, especially mariculture farms, coastal developments, and ocean discharges.  After receiving feedback I wanted to take the next model ‘to the next level’ and built most of the optical mechanical systems, but the heart of the new system lay in improved electronics and code.  Early this year I proposed a group D-Space project to achieve a few goals:  1) build a new system that incorporates open-hardware and open-source code, 2) challenges us as makers with real-world problems to help expand each of our skills, 3) provide much-needed funding to D-Space.  The project is big, so all are encouraged to share their talents and get involved in some small part of it!  (The presentation .pdf is here, 2 MB).

In the late 1970s two scientists named Rhoads and Germano put a camera inside a water filled box in a periscope arrangment.  Instead of peaking up out of the water, they loaded the periscope with a lot of weight (sometimes over 200 kg) and pushed it into the sand.

Much of what is important to marine ecosystems happens in the top 20 mm where oxygen rich water meets nutrient recycling organisms in the mud or sand. By taking pictures of this sediment-water interface we can learn A LOT about an area.  Often the colours of the sediments tell us what kind of metabolisms are present (oxic or anoxic).  By looking at areas across space or time we can also determine the rate of changes due to natural or human activities.

Sometimes the research question is complex like “How quickly is excess fish food recycled into the sediments by the bacteria and animals that live there?” but often important questions can be simple like “How much suffocating mud was dumped into the ocean by that new golf-course.”  Sometimes the absence or presence of key species, like the white bacterial mats seen in the first image, is a clear warning bell that human-activities have gone too far in one area.  Making a map of those areas is how managers can mitigate bad effects.  Collecting images of the sediment-water interface in situ is much faster than collecting cores.  While we have a telepresence down there, it also makes sense to take a picture or two of the seabed too.  If environmental monitoring is inexpensive, effective, and fast, then I think it is much more likely to be done.  That benefits everyone and everything that depends on the ocean (i.e. everyone and everything living in our biosphere).  You can find out more about SPI at this Wikipedia page that I wrote. 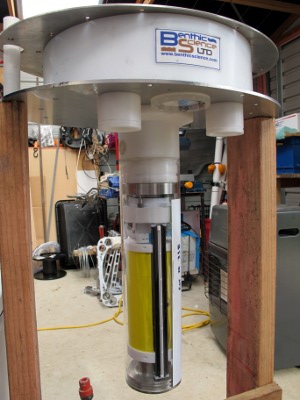 My little company, Benthic Science Limited, has funded the development of the SPI-Scan system thus far, but after seeing what good the prototypes were doing I am keen to take them further.  Because the project contains mechanical, electronic, and software components it seemed like a ripe project to do within the maker community!

The system consists of a computer and batteries in a small boat at the surface connected by a 50 m tether and waterproof connectors to an underwater housing that sits within a stainless steel frame.  The housing contains a flatbed scanner that has been rejigged to rotate around the inside of a clear acrylic tube.  This tube digs into the sediment by one of two methods depending upon which penetrator head is installed.  Two pumps either force water our of the machine’s nozzle blowing its way into mud (fast, but dirty) or one pump injects water into the mud or sand while the other sucks it up through the centre of the tube and out of the top (slower, but cleaner).  While this is happening a webcam is looking at the seabed to monitor deployment while three or five lasers provide a scale for reference.  It’s usually dark down there, so 3W white LEDs are used for illumination.

While doing some research for this project I learned that despite the sheer awesomness of Arduino, there haven’t been many people doing remote USB access for sending and receiving serial commands.  Also, it was surprisingly difficult to find projects which incorporated basic remote functions like PWM LED dimming, high and low load relays, and imaging.  This led some of us Dunedin makers to discuss how we might change that situation.  The current configuration (major kudos go to Paul and Chris Baxter, but a lot of other folks added key bits of sanity) consists of a Raspberry Pi with a Fedora distro sitting in the boat-box serving out a webpage that the user can access via whatever computer is on the boat.  Python is used to translate the GUI messages into Arduino-speak.  The link to the imager is a standard USB connection.  Wait a minute, you’re thinking, USB is limited to 2 m not 50 m!  But the great folks at Icron have USB extenders which are invisible to the system but send standard USB 2.0 over standard twisted pairs.   The scanner and webcam are operated by TWAIN interfaces, while the SPI-Scan’s functions are manipulated on a standard ATMega2560.  The microprocessor, LED fading circuit, and high and low load relays are  incorporated into a PCB which allows standard shields to be added so that end users can add any gadgets they like to it with handy busses for 24, 12, 5, and 3 V DC.  As each image is captured by the scanner or webcam a GPS location is stamped onto the image in a geoTIF format so that at the end of a field-day, the users can open up the images and automagically see a map of the seafloor in the study area.

The electronic hardware for this system should be widely useful to the maker-research communities so everything D-space is involved in is open.  The PCBs are produced under the TAPR license to ensure that original plans (in useful formats) are free for use and that users always have a right to see to the original and the modified versions.  Similarly the sofware used will be all open-source.  There’s no question that our D-space community is growing, but we still need funds to meet rent, power, and (hopefully soon) internet access costs so we’ve come up with a plan.  If we can, as a community, produce a working prototype (I really want to get us all out on a boat and use it!) and the documentation so that I can make more, then I will turn $5k of my company’s money to D-space.  I already have two guaranteed buyers of a new system because, face-it, not everyone wants to build their own so I will also provide D-space with 5% of the sale price of each system to continue to help D-space do what it does.  If folks pitch in their skills,  it’s a win-win situation for everyone!

During the course of this project (hopefully over the next 2 months) I’ll open the workshop and be there working myself on Tuesdays, Thursdays, and Saturdays from 1-5 pm.  There’ll also be work going on at other places (like my house), so please feel free to contact me (paavo@benthicscience.com) if you want to participate, but those times don’t work for you.  Hopefully some folks might present this project at September’s PyCon…I’m not sure how many people are running Python underwater to save the planet right now!  Paul has taken the lead on the most complex PCB, another simpler PCB is needed for the boat box (24 V regulator and V meter) for electronic-minded folks, there’s coding, Raspberry Pi configuration, and GUI tasks for code-folks, and there’s a heap of small tasks for mechanical tinkerer’s (printed parts, hacksawing, working out a belted-drive system tension, etc.).